InicioSin categoría Peat and the mummies of European peatbogs

Peat and the mummies of European peatbogs

Sunday August 4th, 2019 By Mudnatur Comments are Off

Peat is a fossil fuel, generated in peatlands or wetlands by the decomposition of plant residues that form a thick black mass, precursor of coal. Due to the decomposition of the peat, tar and asphalt are produced, substances used by the Egyptians thousands of years ago to embalm bodies. The chemical and physical conditions of peat deposits (temperature, lack of oxygen and an intense antibiotic action) allowed the corpses to remain in a cold, acid and oxygen-free environment, preserving their skin, nails and hair. Thanks to these properties, more than 2,000 mummified bodies from peatlands are catalogued today in Germany, Switzerland, Russia, Denmark and Scandinavia. It has been found that most of them are over 2,000 years old, they have different ages and sexes, and most show signs of suffering an extremely violent death, either due to some sort of punishment or because they were victims of ritual sacrifices.

Since the discovery of the first mummy in 1791 in the Dutch village of Kibbelgaarn, many similar bodies have appeared in peat bogs and wetlands from Northern Europe, from Denmark to Ireland. The fascinating thing about this phenomenon is the good state of conservation of these mummified bodies for centuries. In some of these mummies we can easily recognize facial features and various details of the skin, which has been possible thanks to the peat deposits common on those areas.

Most of the bodies date back to the second half of the Iron Age, with the arrival of the Romans and their rule in the Nordic lands. According to Roman historians, the people of northwestern Europe believed that the gods inhabited the wetlands. Therefore, as punishment, they used to drown criminals, deserters, traitors, adulterers and homosexuals. They also offered the lives of the punished as sacrifices and offerings to the divinities, which would explain why people of different ages and sexes were found in the bogs. In addition, studying the contents of their stomachs, mistletoe powder and berries were found, customary in religious ceremonies of the time and in druid ritual practices. 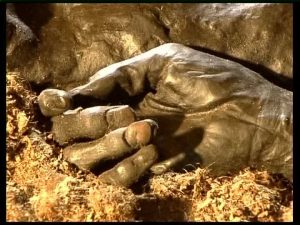 Hand of “The Grauballe man”

Among the several bodies discovered, the case of the Tollund Man stands out. In 1950 in Denmark, the brothers Viggo and Emil Højgaard headed to a wetland near their village, the small village of Tollund, in Denmark, to extract peat. While working, they discovered a corpse buried in the swamp. Although records of these type of discoveries from several peatlands of different countries had been recorded since the eighteenth century, this was a unique case, as the farmers would normally move bodies and, at best, warn the authorities several weeks later. In many others, they simply buried the body in the swamp again. The body of the “Man of Tollund” was in perfect state of preservation. His three-day beard, eyelashes and the wrinkles on his skin were clearly visible and he wore a fur cap on his head. The Danish brothers thought he had been killed and they called the Silkeborg police. But the crime was not as recent as it seemed, as it was discovered that the 30-year-old man came from the 3rd century BC, in the pre-Roman Iron Age. The body, which is deposited at the Silkeborg Museum in Denmark, has remained intact until our days as an object of study of archaeologists and historians thanks to the chemical properties of peat bogs and the peat which preserved them for 2000 years.

Peat for arthrosis and rheumatism

Peat for the hair scalp

Peat and the mummies of European peatbogs